There’s nothing bland about winter. The trees are leafless. The grass are brown. The wind is cold and colder. There might be some blue sky in between the gloomy days, and we rejoice. Oh, how we rejoice!! The shadows cast longer in winter. It seems they’re floating unwittingly following the sun, unsure if it’s going to stay shining or hidden behind the clouds. Then the snow comes, like an eternal promise. For there’s only one color exists in winter and it’s exuberant!

There’s nothing bland about winter, when you take a walk into the woods. The almost- frozen river moves in slow motion. The rocks sprout out between the icy water. A bird twitters calling out its friends, maybe it wants to know if the storm will come over. The yesterday snow laid out on the ground like a white carpet. With every step made, crunch of the dying leaves are heard. The woods fall solemn as winter wishes to stay for another day. Another day, before Spring arrives with its splendor.

Like Loading...
ROMANCE, who loves to nod and sing,
With drowsy head and folded wing,
Among the green leaves as they shake
Far down within some shadowy lake,
To me a painted paroquet
Hath been – a most familiar bird-
Taught me my alphabet to say-
To lisp my very earliest word
While in the wild wood I did lie,
A child – with a most knowing eye.
Of late, eternal Condor years
So shake the very Heaven on high
With tumult as they thunder by,
I have no time for idle cares
Through gazing on the unquiet sky.
And when an hour with calmer wings
Its down upon my spirit flings-
That little time with lyre and rhyme
To while away – forbidden things!
My heart would feel to be a crime
Unless it trembled with the strings. 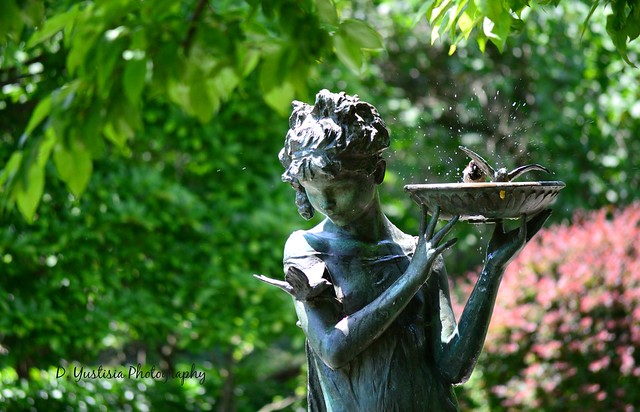 The first time I knew of Edgar Allan Poe was when I was in college. I wasn’t accustomed of getting to know an American poet ( I was still living in Indonesia back then). I read his poem called “A Dream Within A Dream” and “To My Mother” and fell in love right away with his words. When my mother passed away several years ago, what came to mind to describe my mourning was Poe’s poem about his mother. I felt as if the poem was my own words to relieve the pain from losing someone so dear in life. Then, when I took the scene above when my girls and I visited the Conservatory Garden in Central Park, New York, and thought of using it to represent another poem, Poe’s “Romance” was it.

I lost counts of how many snowstorm have ravaged this part of hemisphere. Being stuck at home, I tried to catch up with the online world. The kids were busy with their selves and I was enjoying some me time. Then I caught a glimpse of something flying outside the window. The old tree next to our house has been a well-suited host for several types of birds, and it appeared one particular bird had come to visit. I realized it was a woodpecker, from the red feather on its head. The woodpecker was pecking an old hole in the tree, while the snow began to fall. By the time a couple of minutes past, the snow fell harder with the wind that blew with such strength, it sounded ominous. The petite woodpecker has stopped pecking, and by now was hiding inside the old hole. Its back was shown. The hole wasn’t good wide for it to shield its self from the storm. Suddenly, I felt so sad. I witnessed the woodpecker tried to make the hole bigger, so it could get in as much as possible. But the storm wouldn’t let it to finish. There I was, feeling safe, dry and comfortable indoor, while this small creature had to fight for its survival. Then I remember my complain about the bad winter that’s been going on, and it hit me, who am I to complain anyway. Don’t I feel ashamed for complaining? In the life’s drama, sometimes small doesn’t mean fragile and survival is a matter of being strong and diligent.

I think I will survive (from another snowstorm anyway).

(After some hiatus from writing on this blog, I just want to bid you “hello”. Hope everything’s okay with you.)

Behind the cage at Brandywine Zoo in Wilmington, Delaware,  a pair of eyes were staring at everybody who pass by. A burrowing owl was wide awake.

One terribly winter day, after a snowstorm that dumped about two feet of snow, my daughter and I took a walk to a nearby store. We were passing some houses and on the roof of one particular house, birds were flocking in dozen. Ring-billed seagulls, starlings, and crows among each other. It was very interesting watching how the birds only chose that one house and not others, for a gathering place. There must be something really special about that roof.

PS: You might as well know about how I love birds by now, and with so many of them live around our home, I’ve got to know more about them. Because I think, birds are the most amazing animal.

People who loves animals sometimes becomes attached to them. Some has the quality to attract them like a moth to the flame. This man probably is one of them, who I think perfect to be called the pigeon whisperer. I spotted him sitting on one of the bench at Washington Square, New York City, surrounding by flocks of pigeons last summer. He looked so calm and very intimate with the birds, he didn’t even bother one that stood on his head.

“Tenderness and kindness are not signs of weakness and despair, but manifestations of strength and resolution.”

In 2006, a friend told me about blogging. She thought I might be interested, because I love telling stories and writing. She said to go ahead and try the experience and showed me a blog community called MULTIPLY. At first, I wasn’t felt encouraged and a little bit suspicious. It’s a brand new thing for me, to write something that any people can read wherever they are in the world. It was scary! But I gave my self a push to write some simple things, and being a mother, I had so many things that I could share. My first post was about the experience that my kids had when they visited the children’s museum in New Haven. For the first time, my writing was accompanied by pictures that I took. Then, I wrote another story, about the free summer concert, where we saw the performance from Earth, Wind & Fire. After more journals and photo galleries, I became very accustomed with blogging. People started to pay attention, left lots of comments and we developed friendship, even though we never really saw each other in reality.

Blogging helped me getting trough my anxiety attack that suddenly took me under its control and made my world frightening. I couldn’t think clearly and felt weak. In certain times I would gasp for air, had trouble breathing and almost collapsed several times. I wrote my experience and shared it with people from my inner network. They gave me strength and courage and eventually I got better. We established strong communication and relationship, especially because  we blogged in our native language. It’s like going back home again and again when my friends and I exchanged jokes and anecdotes. Through blogging, I also developed an interest in photography. My first digital camera was Canon PowerShot A430, and it was my tool to tell my story through pictures. I enjoyed taking pictures so much that I wanted to belong with a photography community, and from the moment I posted my first photography journal, I was glad people loved it.

But then an upsetting news announced near the end of last year, that Multiply, the blogging community that I called a second home, my sanctuary, would be diminished. Of course, we were stunned, angry, and sad. I felt like being evicted from this beautiful place that I came to love. We were given some times to safe the blog files and download everything that we’ve ever posted. I had two blogs on this blogging community (one for everyday things, the other for my artworks and crafts), more than a thousand journal posts and photo galleries about my views, interests, feelings and basically about my life. In the announcement, the blog management told us they would extinguish our blogs by December. I was waiting, not able to erase my blogs completely, and it was upsetting. Then two days ago, a friend mentioned that the blogs that she and I used to use as a place to have a chat and story exchange, is NO MORE. Yes, I did safe my posts and photos into files in my computer, but it’s not the same. To remember the sweet memories that I’ve ever shared on my blog (dianadji.multiply.com) – my blog of everyday stories, I’d like to show you some of the pictures I took with my pocket camera, when I was just learning photography. I hope you will cherish them as I much as I do. (All pictures were taken in 2007 and 2008).