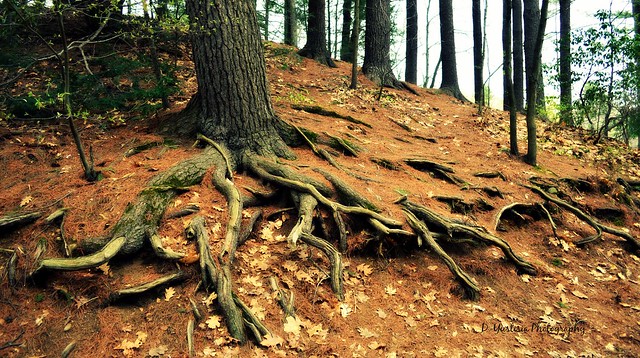 But the glory of trees is more than their gifts:
‘Tis a beautiful wonder of life that lifts
From a wrinkled seed in an earth-bound clod
A column, an arch in the temple of God,
A pillar of power, a dome of delight,
A shrine of song and a joy of sight!
Their roots are the nurses of rivers in birth,
Their leaves are alive with the breath of the earth;
They shelter the dwellings of man, and they bend
O’er his grave with the look of a loving friend.
I have camped in the whispering forest of pines
I have slept in the shadow of olives and vines;
In the knees of an oak, at the foot of a palm,
I have found good rest and slumber’s balm.
And now, when the morning gilds the boughs
Of the vaulted elm at the door of my house,
I open the window and make a salute:
“God bless thy branches and feed thy root!
Thou ancient, friendly, faithful tree!”

When I was visiting the Old Sturbridge Village in Massachusetts, I came across this tree. Its roots spread out almost everywhere that it’s absolutely stunning to see. It looks ancient and yet, it also looks young. I just had to find a perfect poem for the picture I took that day. I found one, called Trees.

Some places are meant to be visited more than once. Because although they may seem the same in shapes, their surroundings may change from time to time. The first time we came to one place, we created some memories. Then when the second time came, to visit it once more, those memories might add or replace by the new ones. When I visited this historical place called OLD STURBRIDGE VILLAGE in 2002, in Massachusetts, with my family and a couple of friends, I never thought that I would visit it again three times. Back than, we had a lot of fun and since our children were still toddlers, the significant history and other interesting parts of this live museum, seemed didn’t matter much. We only saw the museum as a place to be, nothing more to it. It’s simply recreational. Years gone by, and my younger daughter who was 14 months-old back in 2002, was a 5th grader two years ago. She and her class planned a school trip to visit the same Old Sturbridge Village, and I was asked to chaperone them. I loved to go there again, to catch up what I missed the first time I came. This time, I joined the 5 students under my watch, to learn the same things they would learn about the stories and facts about the place and matters, and to create new memories.

When we visited Old Sturbridge Village, it was just 6 months after Hurricane Sandy wreak havoc in New England. The devastation was still present when we reached this outdoor museum. The damaged and uprooted trees were strewn about, toppled on top one another. It’s eery. That scene was a little bit different when I had another chance to chaperone, this time my youngest’ , just two weeks ago. New plants have emerged and the open space where there used to be some trees standing, were more lush with some brushes and baby trees. We were greeted by so many wildflowers that grow covering the meadows. The water was a little bit high from the big rain before and it reached parts of the dirt road. It was my third times visiting the place, and it felt like going back to a place I knew well. The three boys under my guide wandered here and there wondering about things that attracting them. They tried pumping an old water pump located in the middle of the village. It was hard and they had to be patient waiting for the water to come out. Oh, the joy they exclaimed when after a while the water sprouted out! As we took our journey further, I added another memory to the ones I’ve had before, especially since that day was my son’s birthday. He sure was a happy 10-year old all day.