While I was walking towards Grand Central Terminal, accompanying my two daughters and their friend, I came upon this man. I was taking several shots of the Chrysler Building at night, when suddenly my eyes saw the man sleeping on the sidewalk. He laid down on what it seemed to be two pieces of cardboard. The man crossed his legs and covered his body with a jacket. His face was partially hidden under a baseball cap. The man’s trolley, his primary tool of transporting and to hold his worldly possession laid close to him. Under his head was what I believed to be his clothes, in a bag, that became his pillow. As the dusk set, the wind blew a little bit chillier. People kept on passing by, some would stop to take pictures of the Chrysler Building. Under the dim lights in a somewhat quiet street between some buildings with upscale shops, bar and cafes, a man slept soundly without any care in the world. Scattered litters around him, dusts that settled and blown away by the wind, didn’t bother him at all. I took one shot of the man, and kept on walking. I didn’t want to wake him or maybe I tried getting away before I felt guilty for him. In my head, I could hear a song,”She calls out to the man on the street. Sir, can you help me? It’s cold and I’ve no where to sleep. Is there somewhere you can tell me?” from Another Day in Paradise, a song written by Phil Collins. The night sky had darkened and on a train ride home, the song kept playing in my head. “It’s just another day for you and me in paradise. Oh, think twice, it’s just another day for you, you and me in paradise”. 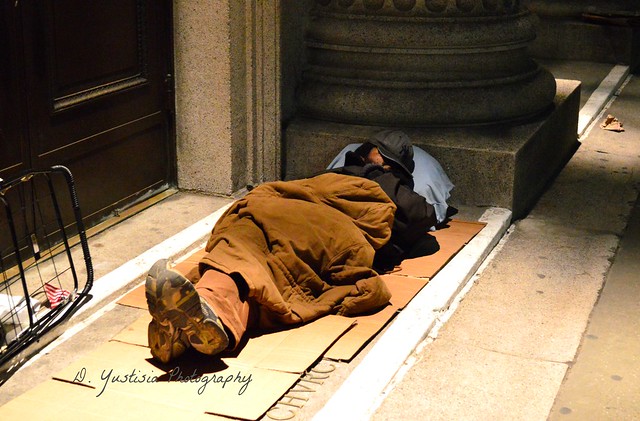